We managed to navigate the 2nd ger visit without having to consume any fermented mare’s milk, which I have to say, was a bit of a relief, as all reports suggested that it would go through us quicker than rancid chicken.  We tasted some home-made cottage cheese and the obligatory milk tea before saying our goodbyes and heading for the border.

Our Fuji Instax Mini camera (akin to a polaroid camera) that we brought with us, has been invaluable in Mongolia.  The number of times that we have brought it out and the resulting photograph has been cradled by the recipient as a truly cherishable memory of the moment we shared has been innumerable.  Having an instant photograph of their family or themselves has been something that, although we may take for granted, to them is a luxury afforded only to an elite few!

The town of Olgii proved to be a good choice enroute to the border as we met an overlanding  couple in a Landrover Discovery.  Albeit he was from New Zealand and his partner from Belgium, they now live in the United States and are following a similar journey to ours and we hope to meet up with them again in Kazakhstan if our itineraries collide! 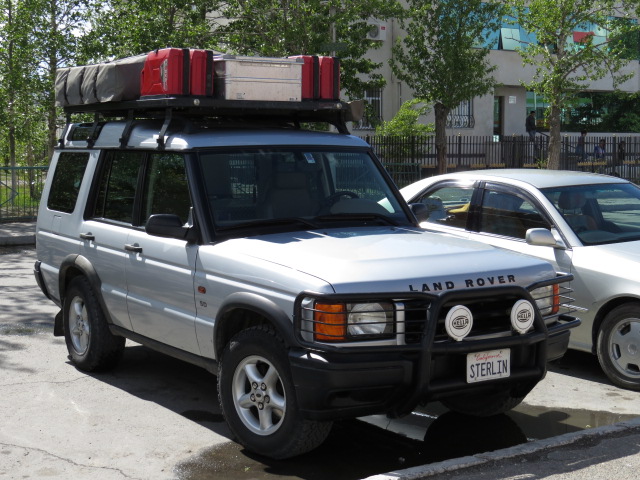 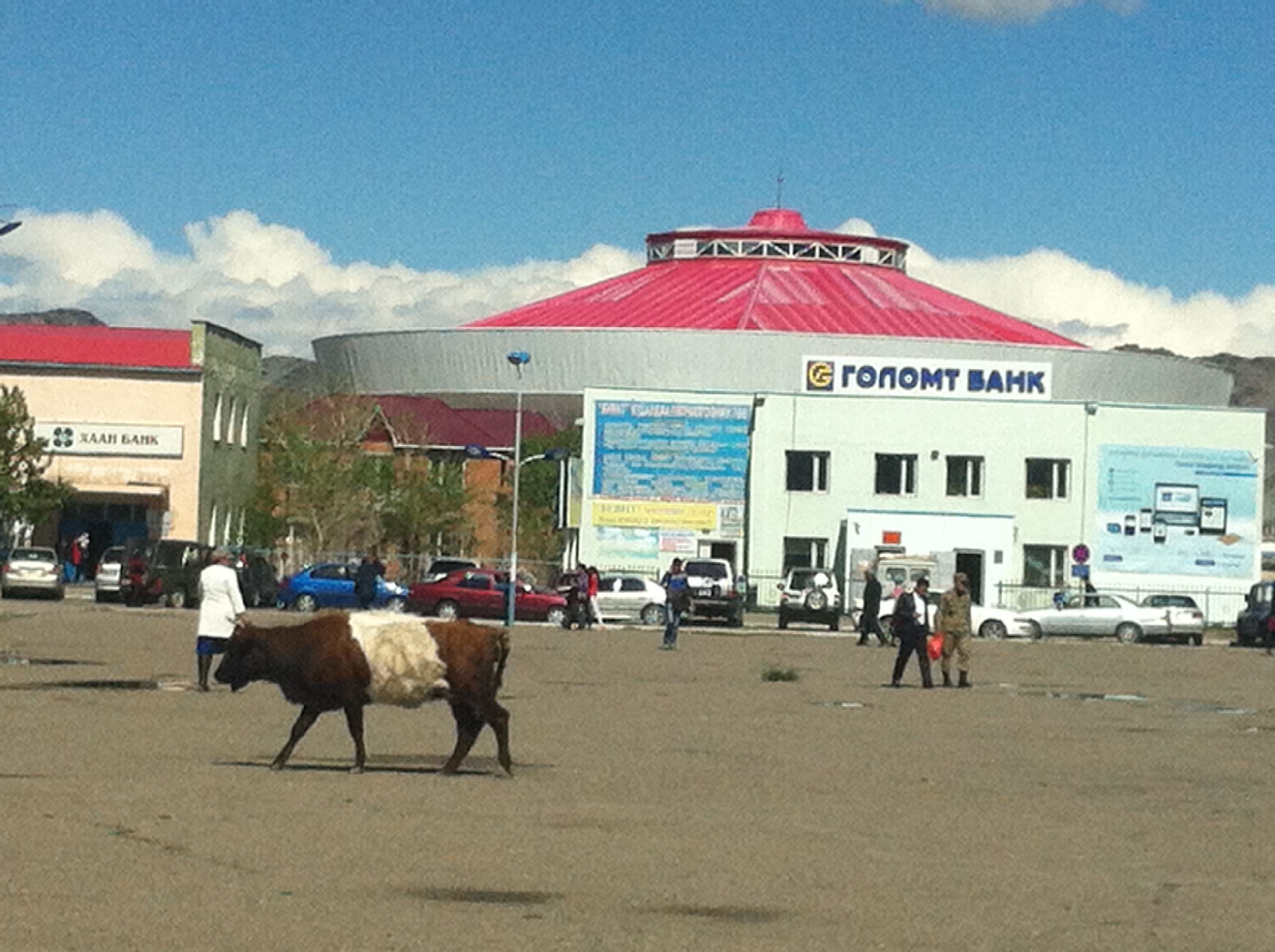 Anyway, we departed Mongolia within our original visa limit and after an extremely tiring 5 and ¼ hours at border control, we were in Russia yet again.  We were now heading for the Altai Region and enroute met a lovely French family travelling in the opposite direction that in four months of travelling, were yet to meet another foreign vehicle!  We chatted to them for a while and only 1km onwards found a campsite that proved to be the entry to the Altai Mountains Region. 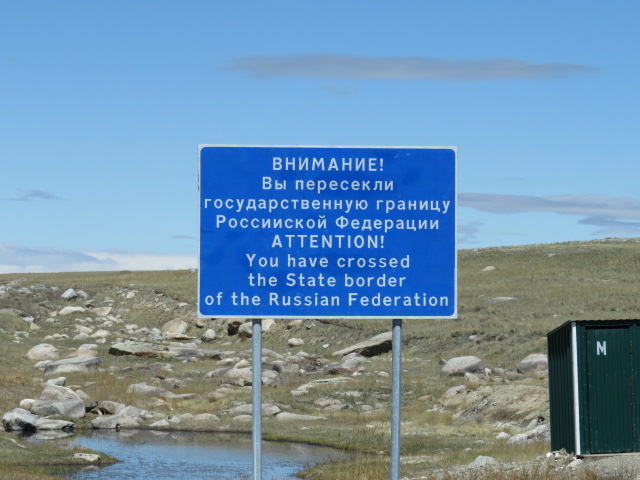 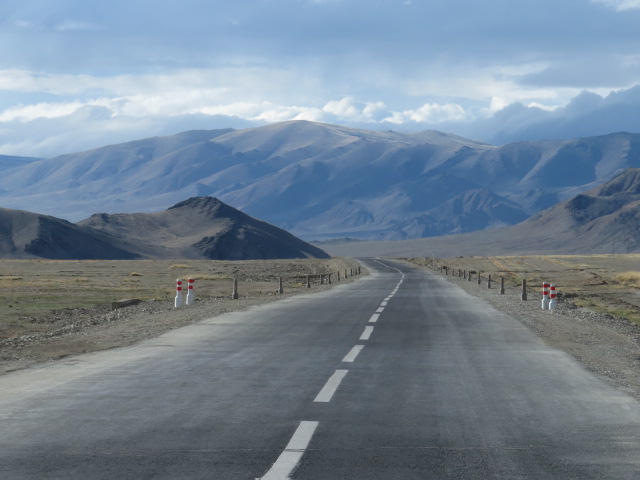 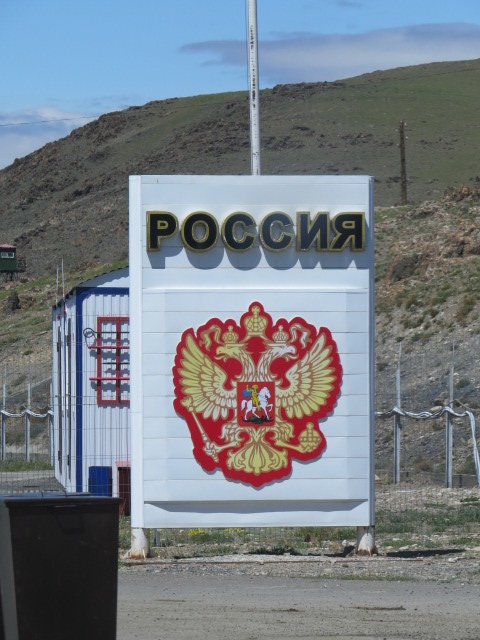 The Altai Region was lovely and the spectacular scenery was unending!  We were amazed with the influx of Russian vehicles coming towards us and realised that we had entered the region on what was obviously a holiday long weekend.  All possible camping options were full with tents and vehicles and finding a camp proved to be rather difficult but nonetheless achievable given Justin’s talents. 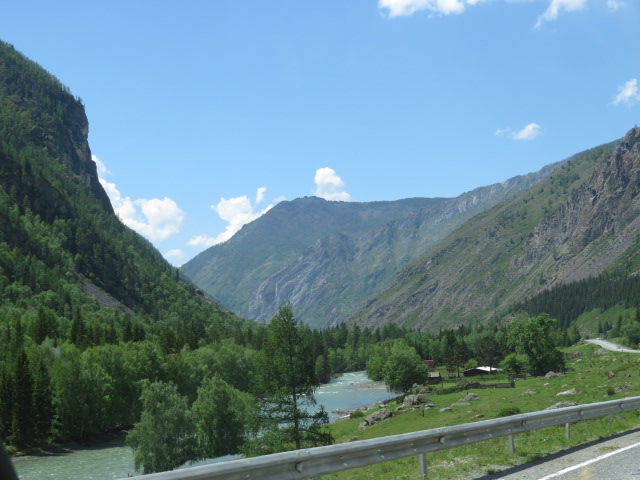 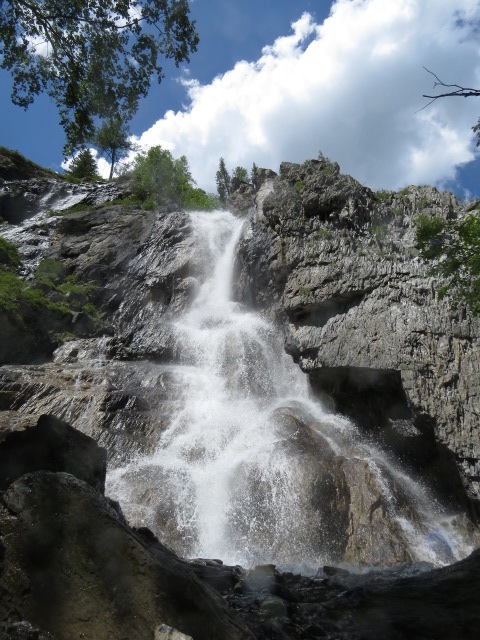 The following day I spotted a track that proved to be an excellent campsite and although early in the day, we decided not to waste such an opportunity and made camp.  I wish to take cudo’s here as the camp I found was along a section of river dotted with resort facilities and between two towns only 5kms apart so to find a spot unoccupied with Russians was, I thought, pretty good!  We saw much evidence in the northern part of the Altai of the recent flooding with some very sodden ground and road repairs underway but thankfully we had obviously timed it just right and had lovely warm sunny days! 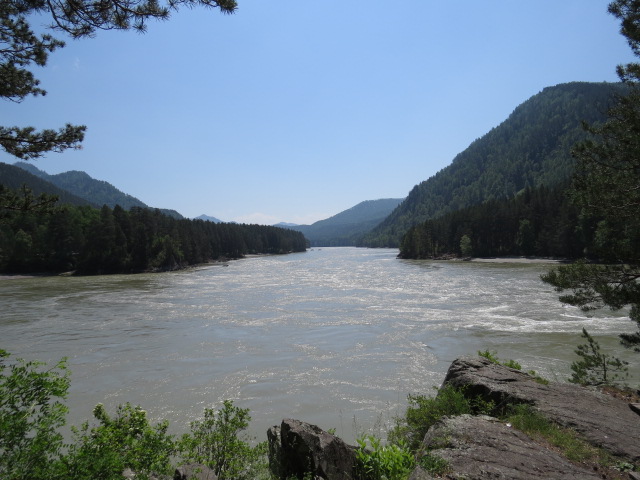 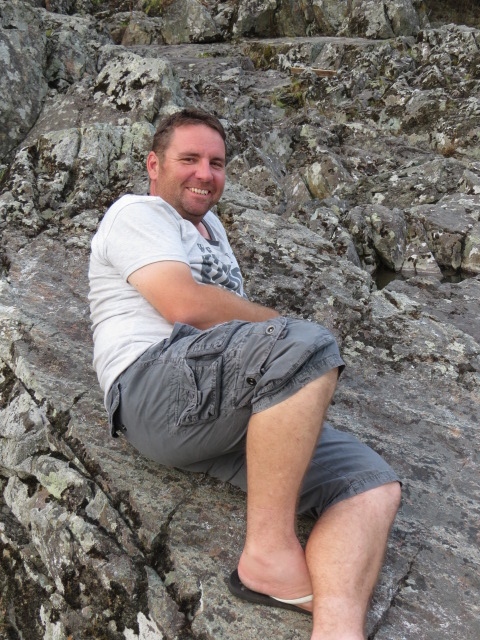 Anyway, as I haven’t written much to date, I thought that I would summarise the trip so far.

Far Eastern Russia/Siberia was a place that I found very interesting and full of surprises – mostly from the people. Given a culture that feels that smiling at a stranger is a sign of lunacy rather than friendliness, I found that once engaged with the people, their friendliness was overwhelming and on several occasions, we were shown hospitality that I think would be rare in our own community!

Mongolia was a complete contrast to Russia, as the people were more than happy to smile at strangers and engage in whatever way available.  They were fascinated by our camper and I put this down to their nomadic existence and a respect for others living likewise!  However their curiosity was something that needed to be factored in when choosing a campsite, as I suppose when herding goats all day a foreign vehicle is going to prove too much to bare and an inevitable visit is always on the cards – even if it is at 10pm!!  The land itself is a land of such contrast with not only the landscape but the weather changing rapidly.  Mostly devoid of trees, the terrain varies from desert to snow-capped  mountain ranges, from marshy boggy valleys to dust bowls and sand dunes! Pleasant warm weather can overnight turn to snow or torrential rain!

For those of you who know me, I am a black and white person – grey is not something I do well and Mongolia was certainly a challenge!  I like to navigate but when there are no visual cues (such as a street sign!) to confirm that the track chosen is correct, I find myself getting a little stressed!  Mongolia is noticeably devoid of any signage that may indicate that you are on or which is the right track and a personal adjustment was required!   Tracks shown on maps no longer exist in the same place and some that are shown as major roads on all maps don’t go through unless the season is correct! I like to think that I adapted to this and by the end of our time in Mongolia was a far more liberal minded navigator with a heading in the general direction of our destination being enough to placate me into quiet confidence that we would arrive at our destination.

Returning to Russia almost seemed a comfort as it was returning to the familiar – a language and customs (and signage) that we felt we were beginning to feel comfortable with prior to entering Mongolia.  It was only short lived however as we cut across from Biysk to the border, bypassing Barnaul, and were yet again changing countries into Kazakhstan!  1 Hour later and we had navigated yet another border in what seemed like record time! 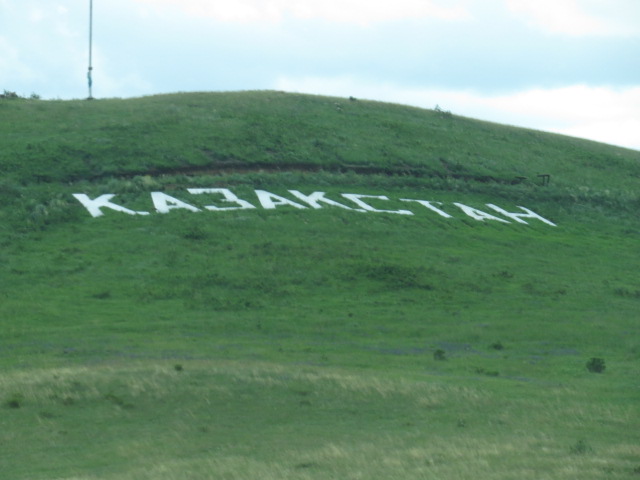 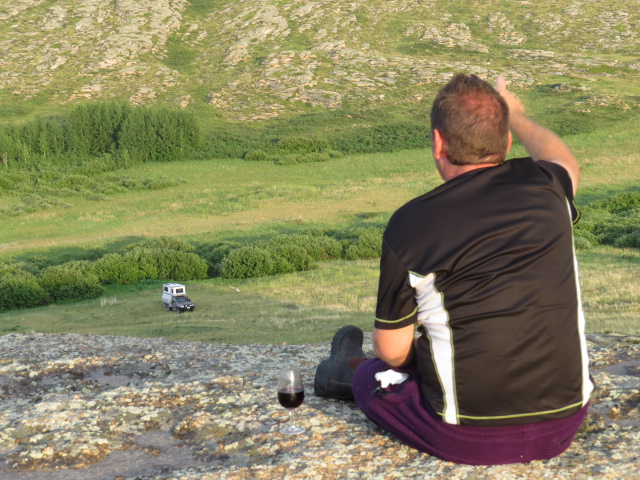 Only 3 ½ hours in and we had been stopped 3 times by the police for document checks.  We had heard that Kazakhstan had a reputation for this, but when we were flagged down by a civilian vehicle occupied by uniformed officers we were a little concerned and only pulled over once we found another marked police vehicle to provide us some back-up.  Whether this was a factor or not, the uniformed officers checked all our documents and let us leave but continued to follow us for several more kilometres before turning off.  A good way of deterring travellers from injecting money into the local economy!

One thing that has been a stand out amongst many of the drivers that we have encountered so far is the complete lack of brain function that is present.  It would seem that many are afflicted with random neural activity that fails to form the consecutive thought processes necessary for safe, predictable driving. Overtaking at breakneck speed, when there is not the room to do so, only to pull over within minutes for some obscure reason followed by the repeat process is an all too familiar experience and hurtling their vehicles over turbulent terrain with no apparent vehicular control and certainly no consideration for the durability of the vehicle’s engineering is commonplace! Neurons fire at random – goat, go fast, overtake, stop, horse, go fast, truck coming, turn, cigarette, stop…

Anyway, all this prompted a line of thought on the statistics achieved so far on this journey and as a book-keeper this appealed to my sense of numbers so the following represent some milestones achieved so far:

We arrived in Almaty, a very pretty tree lined city with a great choice of restaurants and a distinctly European feel.

We booked a stay at the Keremet Apartments and a quick check of the internet seemed to suggest that the couple we had met in Olgii, Stephen and Caroline,  had also arrived in Almaty.  Due to a mishap with their border paperwork they had been issued transit visas instead of tourist visas and had to now fast track through Kazakhstan in 5 days as the problem proved too difficult to rectify.  A few quick emails back and forth and we met for dinner which was had at a wonderful and reasonably priced restaurant called Raketa. 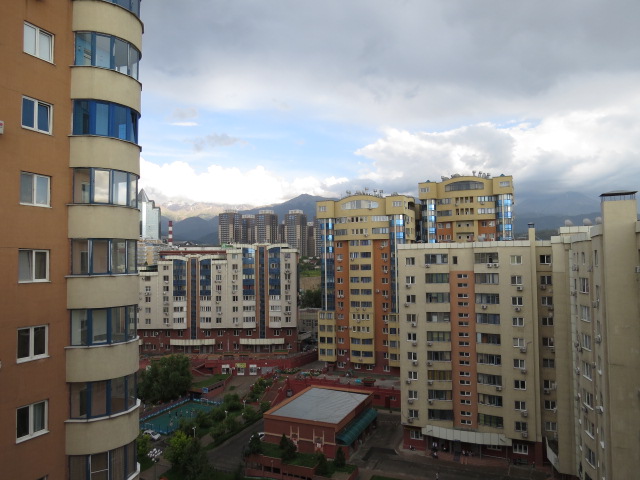 It is necessary to register your visa within 5 days of arrival when coming through a land border and this unfortunate process means that you have to lose some sightseeing time running back and forth to the migration police.  Despite reviews on the internet that suggested that this process was a manic affair, the only useful bit of information gleaned was that window #3 was the one!

A friendly man advised us that we required copies of our passports and a conveniently located shop outside the building procured these. Back to the man at window #3- he asked the address of our accommodation, filled out the forms for us and told us to return at 5pm.  Sorted!  Maybe we were lucky but the process was nowhere near as daunting as we were expecting.

Another meal was shared last night with our new friends, this time at the Shakespeare Pub before departing in opposite directions today.  We are both heading for Kyrgyzstan but obviously Stephen and Caroline are taking the most direct route as they need to exit Kazakhstan today in order to meet their transit visa timeframe.  We had a great time last night and a more than a few beverages passed our lips and after arriving back to or apartment after 1am, I have to admit, I’m feeling at about 80% this morning but nothing a good nanna nap can’t fix! 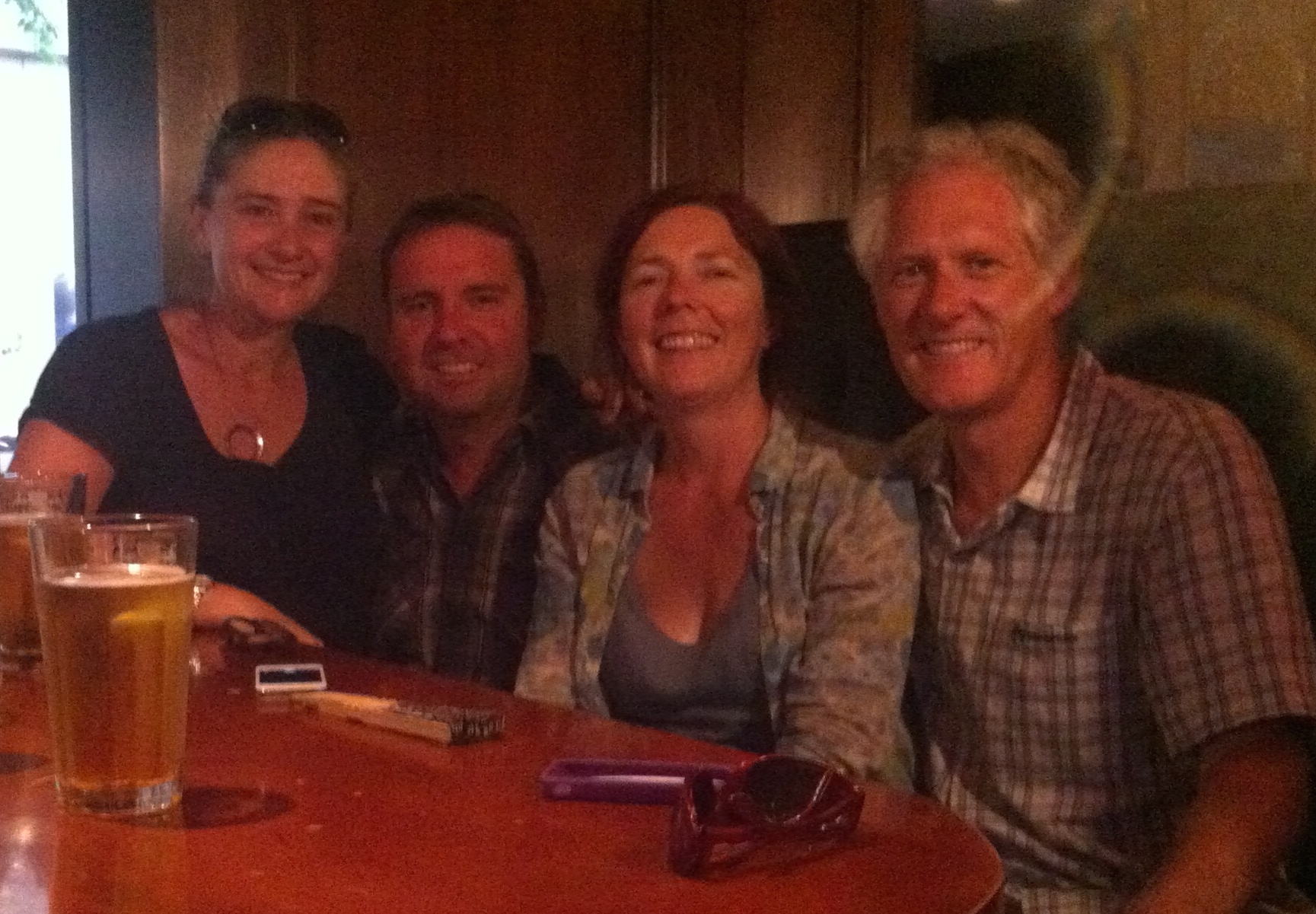 So glad we met Stephen and Caroline and hopefully our paths will cross again in Kyrgyzstan.  Their website is travels.caroline-and-stephen.com and is well worth a look.

See you next time in Kyrgyzstan!